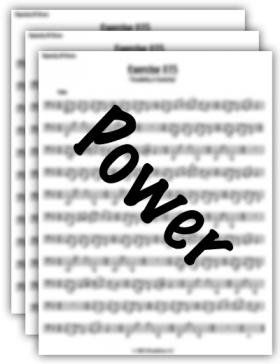 XtremePower & Endurance is a collection of intervallic studies specifically designed to build muscle mass and promote smooth muscle motion in the muscles of the face and lower abdominals.

Proper application of the exercises will yield not only a noticeable increase in strength & endurance but will ultimately give you the control needed to maximize your projection and volume.

With improved muscle tone, strength and finite control over air speed and pressure learn to play in all registers of your instrument effortlessly. Achieve that freedom and flexibility you’ve always wanted while playing "Sky High" or while buzzing freely on "Pedal Tones."

Frank Dorritie has played both bugle and trumpet since the 1960's performing with such notable artists as Billy Cobham & Maynard Ferguson. He has instructed &/or arranged for; The Cadets, The Blue Devils, Madison Scouts, Cavaliers, Bluecoats, Santa Clara Vanguard Drum & Bugle Corps as well as a host of others.

Among his audio production credits are CD's with Wynton Marsalis, Johnny Otis and the National Cast of "Phantom of the Opera."

Frank's honors include nine Grammy nominations, two Grammy awards and membership in both the World Drum Corps and Buglers Halls of Fame.

He is active internationally as a brass clinician, holds the DCA Individual Soprano titles for 2003 & 2005 and has served as music consultant for Fox Network programs. Frank chairs the Recording Arts Department at Los Medanos College in Pittsburg, California and his book "Essentials of Music for Audio Professionals" is the standard in its field.