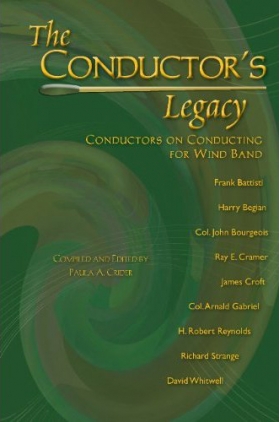 Conductors on Conducting for Wind Band

Compiled and Edited by Paula A. Crider

What would you ask the leading band directors of our time in a one-on-one conversation? Paula A. Crider, a seasoned and distinguished band director in her own right, shares the wealth of knowledge gleaned from her interviews of the extraordinary personalities who have changed the landscape of the wind band world in this remarkable book.

With insight and clarity of thought, Crider asks the probing questions that prompt stories of talent, work, sacrifice, ingenuity, bravery, and determination.

These pioneering and innovative conductors share their concept of band sound, views on score marking, advice to music majors and young band directors, thoughts on how to advance the wind band genre, the elements of their musical success, and much more about the art and craft of conducting a band.

In calling forth these thoughts, Crider inspires these leaders of the wind band profession to remind us all not only of where we have come from, but also provide a stirring handoff to us and to future generations.

Following a distinguished thirty-three-year teaching career, Professor Paula A. Crider continues to share her passion for making music through an active schedule as guest conductor, lecturer, clinician, and adjudicator. She has enjoyed engagements in forty-seven states, Canada, Ireland, the United Kingdom, France, Italy, and Australia. She is Professor Emerita at The University of Texas, where she was twice awarded the Eyes of Texas Award for distinguished teaching. Professor Crider has taught at all levels of education, has presented seminars for professional teachers throughout the United States, and continues to work with talented young people in student leadership workshops. She serves as Coordinator for the National Band Association Young Conductor/Mentor Program and was recently appointed to the Conn/Selmer Educational Board. She is a Past President of the National Band Association and is currently President Elect of the American Bandmasterís Association.