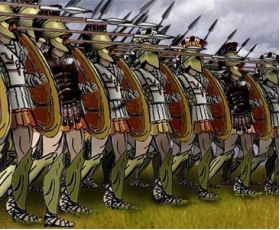 As the title suggests, Three Days in August is a work based on the events occurring during the three-day Battle of Thermopylae, more popularly know as the Battle of the 300, in 480 BC. Greatly outnumbered by the Persians, a small band of Greeks, lead by 300 Spartans under the command of king Leonidas, held off their attackers in the pass of Thermopylae long enough to delay the Persians long enough for another, larger force of Greeks to defeat them in a later battle. The sections of the piece include Prelude: The Prophecy of Leonidas, Day 1: The 1st Wave & Attack of the Immortals, Day 2: Xerxes Perplexed & the Treachery of Ephialtes, Day 3: Surrounded and Betrayed, The Fall of Leonidas, and Epilogue: The Legacy of the Spartans - Victory at Salamis and Plataea. Three Days in August attempts to recreate these scenes in audio form, depicting the historical event of that time.