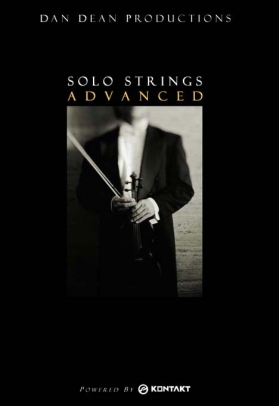 Convolution – Timbral and Reverb. This is the first sampling product to employ Timbral Impulse technology, developed with Numerical Sound which allows you to match the DDSSA's sound to a captured snapshot of a different string section or solo instrument. Also by Numerical Sound, a custom created library of Reverb Impulses custom designed for use only with the DDSSA. The Dan Dean Solo Strings ADVANCED is composed of 3 main instrument groups:

Powered by the KONTAKT2 Plug-In. Nothing on the market sounds as good, has as many features, lower latency or better overall performance than KONTAKT2. K2 has been thoroughly "road tested" and has more user hours than all of the other soft-samplers. Use DDSSA as a stand alone application. KONTAKT2 works on the MAC in OS X (now supporting "Mactel" computers) or on the PC in Windows. Because DDSSA is a Plug-In, open it in Logic, Pro Tools, Digital Performer, Cubase, Sonar, Garage Band or in any VST, DXi supported application.

High quality sample recordings with virtually no noise. We returned to the original source recordings and retransferred the sound files, cleaning up the already beautiful wave files. There is no noise or other artifacts in the DDSSA. The solo instruments are 16 bit full scale and the ensemble presets are 24 bit. The ensemble arco, arco SA, tremelo, trill half step and trill whole step are looped.

These extraordinary programming features and technologies in conjunction with the highest quality sample recordings give the keyboardist unprecedented, unparalleled control over previously unavailable performance variables. The result is a collection of the finest Solo String instruments and String Ensemble presets available. They are very easy to use and sound great.

The Kontakt2 Player is included with these titles. Solo Stings Advanced functions as a stand-alone unit or as a plug-in inside ProTools, Digital Performer, Cubase, Logic, etc.